Excavation Section Grouting Reinforcement of Mountain:Due to the functional requirements of an old mountain tunnel, it was planned to remove the lining and excavate at a designated position in the tunnel and set up a 15m long passing bay.

However, because the rock mass in the penetration range of the rock bolts was too fragmented, the designed drawing strength could not be achieved.

In order to enable the project to proceed smoothly, the contractor urgently sought professional specialists to carry out the consolidation and grouting of the rock mass in this section, and cooperate with the rock bolting work. 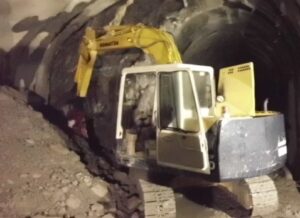 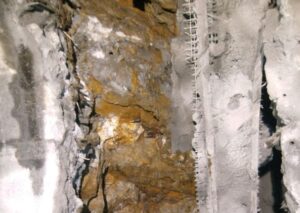 After accepting the job, the company immediately set up a task force to study the geological data and various test excavation records in the region in detail, and assigned engineers with tunnel construction experience to conduct on-site surveys.

Judging from various data, the rock mass joints in that section were very developed and poorly cemented, and there were localized voids between the lining and the rock mass.

In order to truly eliminate the occurrence of construction hazards, the proposed solution was as follows:

(1) The voids behind the lining were to be completely filled with cement mortar to improve the pull-out resistance of rock bolts.

(2) Use rock bolts to maintain rock stability during excavation.

(3) Consolidation and grouting of fractured rock layers to increase their integrity.

(4) Use self-drilling rock bolts instead of grouting pipes to pour cement grout to consolidate the rock mass. 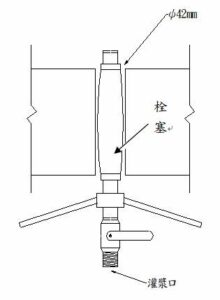 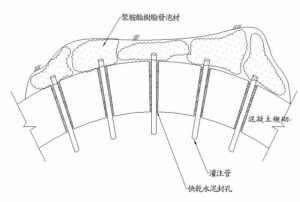 In order to save works time and prevent the collapse of the excavated position, the design aimed to reduce the time and quickly employ the reinforcement function, as follows:

(1) Use quick-setting cement to fill the lining voids in the test excavation area that were not really blocked by shotcrete.

(2) Drill holes with a diameter of 42mm and a spacing of 50cm are set at the front and rear ends of the excavation area. The drilling depth based on the principle of penetrating the lining.

fter installing the grouting pipe in the hole, it is filled with two-component type high expansion ratio polyurethane resin. The gaps behind the lining and the larger cracks in the rock mass are blocked to prevent the grout material from escaping when the expansion section is filled.

(3) Drill holes with a diameter of 42 mm and a spacing of 200 cm in the excavation section. The drilling depth is based on the principle of penetrating the lining.

After installing the grouting pipe, exhaust pipe and grout return pipe in the holes, fill it with cement mortar with W/C=1, so as to seal gaps behind the lining and the larger cracks in the rock mass.

(4) Considering that the rock formation in the excavation area was extremely fractured, it is easy to cause borehole collapse, and self-drilling rock bolts are to be used to replace traditional rock bolts.

The rock bolts are divided into upper and lower rows, with a penetration length of 6m and a spacing of 0.75m. They are installed in two stages by skip-hole and pouring the fixed grout.

When grouting, according to the rock bolt setting sequence, two-stage skip-hole pouring is adopted to achieve releasing and returning to the grouting with complete filling of the gaps in the rock mass.

The consolidation grouting adopts pure cement grout with W/C=1, and the outlet pressure of not more than 500kPa. 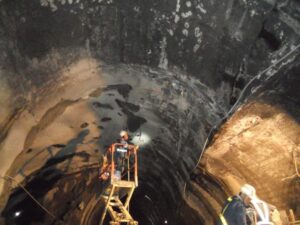 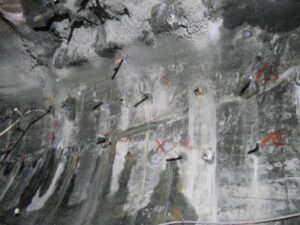 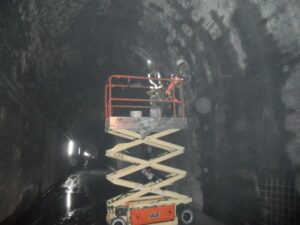 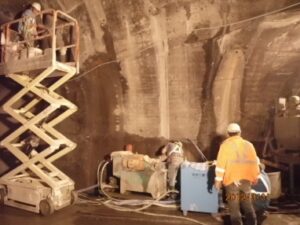 Due to the tight construction time of this project and the cumbersome operation of the hypothetical project in the tunnel, the works was carried out day and night in shifts, in order to complete the work in the shortest time.

The works process went smoothly, but in the cement grout filling and pouring process, due to the poor working conditions on site and difficulty of near-end operation, blocking of the pipes and excessive wear on the grouting machinery occasionally occurring. 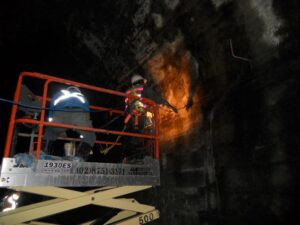 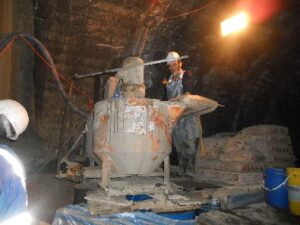 Because this work belonged to an early stage of project, before the completion of rock bolt construction, consolidation grouting and grout maintenance, in order to take into account operational safety, other projects could not be carried out, and the personnel of each unit felt heavy pressure.

Fortunately, with the full assistance of the contractor, the company successfully completed the scheduled work without significant delay in the construction period. The unit responsible confirmed that the gaps behind the lining and the broken rock layers had been filled and reinforced, and accepted the works.

After the results of the rock bolt pull-out tests met the design requirements, the site was returned to the contractor for follow-up excavation work.

The grouting reinforcement work of the excavation section of the mountain tunnel was successfully completed. 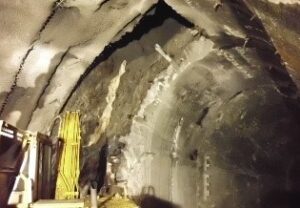 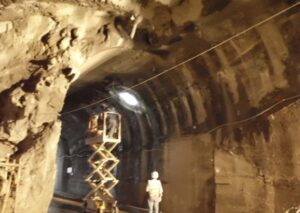